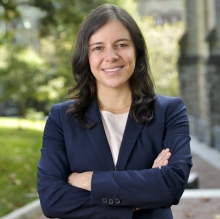 Dr. Cuellar's research examines the use of statistics in the law. Her research focuses on two areas: causal inference and the analysis of forensic evidence.

Dr. Cuellar studies how to make appropriate statistical arguments of causal attribution. These include cases of Shaken Baby Syndrome/Abusive Head Trauma, in which it must be determined whether a child was shaken or abused, and toxic torts, in which, for example, it must be determined whether the plaintiffs' cancer was indeed caused by their exposure to a harmful chemical. Dr. Cuellar has developed an innovative influence-function-based method to estimate the probability of causation, a tool to evaluate causal attribution. Under weak structural assumptions, her method allows for statistical inference even with nonparametric estimation of nuisance functions, and thus it is robust to parametric assumptions. This method could help to more accurately estimate probabilities that lead to determining whether an individual or a group is guilty of an action or a crime.

Dr. Cuellar also researches the validity of statistical statements in forensic analysis. She is currently examining how contextual information about a case (such as demographic information about a suspect) influences a forensic examiner’s conclusion (such as concluding that the suspect's firearm is the same as the firearm used in the crime scene). She is also evaluating the foundational validity of tool mark analysis, in which examiners often claim they can determine whether two marks made by a tool, such as a screwdriver, were made by the same tool. Strengthening the statistical foundations of forensic science could help make the criminal justice system more fair.